The ACLU’s role in Brown v. Board of Education

The Brown v. Board of Education decision in 1954 was a pivotal moment in American history. In this Supreme Court case, public schools were ordered desegregated in a unanimous verdict. The American Civil Liberties Union (ACLU) played an important role in Brown v. Board of Education, ensuring that “separate but equal” would no longer apply to educational facilities. Though public education was not fully desegregated by the decision, it began a series of legal victories for the burgeoning civil rights movement and defined constitutional support for racial equality.

Because of Plessy v. Ferguson (1896), public schools and other public facilities in the United States could be legally segregated by race if there was equality between what was available for blacks and whites. In reality, racially segregated facilities, including public schools, for African-Americans were inferior to those for whites. By the early 1950s, as part of a wider movement of presenting legal challenges to aspects of racial segregation, lawyers for the NAACP began filing class action lawsuits in various states seeking to allow black students to attend white public schools.

One such case was filed against the school board in Topeka, Kansas. Oliver Brown tried to enroll his daughter Linda in a white public school but she was denied admittance because of her race. Filing a lawsuit against the school board, he argued that schools for blacks and whites were unequal and would never be equal. Further, Brown asserted that this inequality violated the Equal Protection Clause of the Fourteenth Amendment to the Constitution. Though a federal district court dismissed Brown’s claim, Brown appealed to the Supreme Court. His case was taken and consolidated with other school segregation suits. Thurgood Marshall of the NAACP served as the plaintiffs’ chief counsel for the case.

The ACLU took part in the Brown v. Board of Education case as a friend of the court, assisting the Browns as well as plaintiffs in other suits that became part of this legal action. The ACLU submitted an amicus curiae brief in support of Brown’s case as well as providing additional legal advice to the attorneys arguing the case, with whom they corresponded extensively.

The Supreme Court announced the ruling in May 1954, with Chief Justice Earl Warren penning the unanimous decision. Agreeing with the plaintiff’s claim about the Equal Protection Clause, Warren stated that equal education was guaranteed under the Fourteenth Amendment. He stated his belief that public education was essential to life in the twentieth century, both black and white children needed to be educated equally to participate in public life, and racial segregation in schools was always unconstitutional because it negatively impacted the ability of a black child to learn. In sum, Warren wrote, “Separate educational facilities are inherently unequal.” 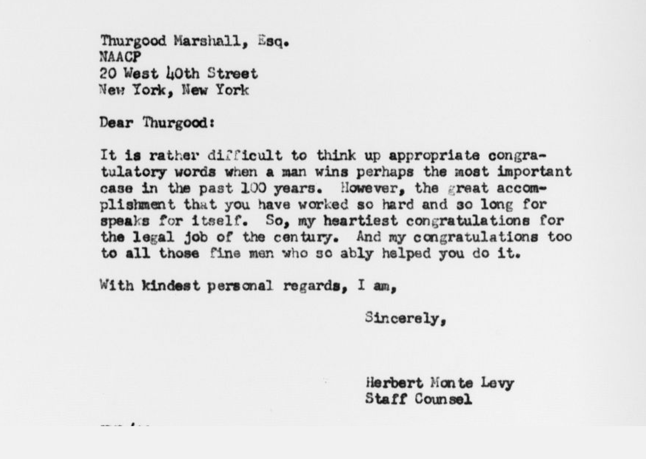 The Effect of the Ruling

The Legacy of Brown

Though public school integration took more than a decade in some parts of the United States, Brown v. Board of Education greatly influenced later decisions related to legalized inequalities. The ruling especially emboldened and gave legal muscle to other civil rights challenges, rulings, and laws. Additionally, the case helped usher in profound cultural changes in the United States and had a wide impact on the lives of both black and white Americans. By gaining access to better educational facilities, many African-Americans ultimately saw an overall increase in incomes and upward social mobility, and were able to fully participate in civic life. The support provided by organizations like the ACLU in legal cases like Brown v. Board of Education helped ensure that these transformations were able to take place.