Discover Brazil's fascinating past through what is regarded as one of the finest archives on its history and culture.

Brazilian and Portuguese History and Culture: Oliveira Lima Library, Monographs features approximately one million pages of primary sources on Brazilian history from colony to republic, as well as the political and economic dimensions of Brazil and the Portuguese empire. With primary sources from 3,800 publications dating from the mid-sixteenth century and the early days of printing and moveable type into the ﬁrst quarter of the twentieth century, Part II oﬀers a snapshot into the culture, economics, and history of a past era, which remains of vital interest to contemporary research.

Originally the personal library of the Brazilian diplomat, historian, and journalist Manoel de Oliveira Lima, the Oliveira Lima Library has long been regarded as one of the ﬁnest collections of Luso-Brazilian materials available to scholars. It is now accessible for students, educators, and researchers alike to delve deeper into Brazilian and Portuguese history and culture from the sixteenth to the twentieth century. Brazilian and Portuguese History and Culture: Oliveira Lima Library, Monographs charts the development of Latin America's most influential power with valuable, unique primary source materials valuable for researchers studying topics such as colonialism, the Brazilian independence period, slavery and abolition, the Catholic Church, indigenous peoples, immigration, ecology, agriculture, economic development, medicine and public health, international relations, and Brazilian and Portuguese literature.

While Brazil is the central focus of this portion of the online archive, the early period of Portugal's overseas expansion is amply covered. It is within the context of empire and ideology—the globalized effort to control and exploit resources and to impart the ideals of western European civilization—that the scope of the collection must be fixed. As the eighteenth century progressed and Portugal's African and Asian colonial possessions diminished in importance, the huge promise of Brazil presented itself. A great range of publications from that time document the scope of Portuguese America as well as the efforts to exploit the land, establish institutions based on a common language and religion, and found the mechanisms of government. With the transfer of the Portuguese court from Lisbon to Rio de Janeiro (1808) and the subsequent establishment of Brazil as an independent constitutional monarchy (1822) and as a republic (1889), publishing activities expanded to include administrative materials, scholarship, and creative writing. By the turn of the twentieth century, Brazilian publications documented a great number of subjects, and thus the collection supports scholarly interest in the rise of a major economic and political power. The collection also reveals the tastes and mindset of Manoel Oliveira Lima and fellow intelligentsia of his era, offering a snapshot of the cultural and historical assumptions of a past era that remains of vital interest to contemporary research.

Included here are approximately 3,800 publications from the mid-sixteenth century and the early days of printing and movable type into the first quarter of the twentieth century. The oldest imprints include evangelical tracts along with descriptions of new lands and peoples. Dictionaries for recording new languages gradually expand in coverage to include geographical, historical, and biographical information. Legislation and laws governing most aspects of life and property constitute important resources for understanding Brazil's development. Many investigative reports by scientists and geographers provide information utilized by entities involved in the exploitation of resources and the establishment of political boundaries. These publications, rich with description and often containing detailed maps and illustrations of fauna, flora, and inhabitants, constitute a rare and invaluable record. Documents assembled by scientific associations, religious orders, and governmental bodies broaden the coverage. Extensive scholarly, religious, and creative writings by both major figures and many minor ones reflect the intellectual formation of the Brazilian intelligentsia.

Imprints prior to the nineteenth century are mainly from Portugal and other European countries, notably England, Holland, and Spain, with some works in German and Italian. The collection follows the growth of a Brazilian publishing industry established in 1808, initially centered in Rio de Janeiro and Salvador da Bahia and with secondary centers in Recife, Belém do Pará, and later São Paulo. The collection also contains rare regional publications from cities of the Brazilian interior. The primary language is Portuguese, and depending on the period and subject, texts are also in Dutch, English, French, German, Italian, Latin, and Spanish.

Because of the comprehensive nature of the Oliveira Lima Library's focus on Brazil from colony to republic and in broader global contexts, the fields of activity and inquiry are vast. The earliest imprints cover the Age of Discovery, situating Brazil among the many regions of the world touched by Portuguese expansionism. Later works deal with political and economic dimensions of Brazil and the Portuguese empire. Especially for the eighteenth and nineteenth centuries, a substantial array of works devoted to travel and description give insight into many aspects of Brazil in the transition from colony to independent empire. Commerce, trade, and slavery figure prominently. Studies of agriculture and geography offer accounts of coffee, cotton, rubber, and sugar cultivation, while scientific works describe the region's plants and animals and inventory land, water, and mineral resources. A significant body of documentation created by scientific expeditions, especially in the Amazon basin, further deepens the collection. A small but invaluable gathering of works devoted to indigenous inhabitants offers descriptions of cultures and societies from the time of initial contact. Early sermons by the Jesuits and other religious orders, along with their accounts from missions, illuminate the role of Roman Catholicism and chronicle the first two centuries of settlement. The role of government at the national, provincial, and municipal levels can be traced through public policies concerning such topics as the development of infrastructure (e.g., railroads, ports, and roads), military operations, border determinations, immigration, colonization, public health, educational institutions, and foreign relations. Historical accounts of economic conditions and activities bring together materials essential for understanding the domestic and export economies, especially trade, industrial development, agribusiness, and mining. Works by novelists, poets, essayists, and members of the liberal professions round out the collection. Finally, government publications record state activity at the national and subnational levels, often with data and legislation valuable for understanding the course of Brazil's development. 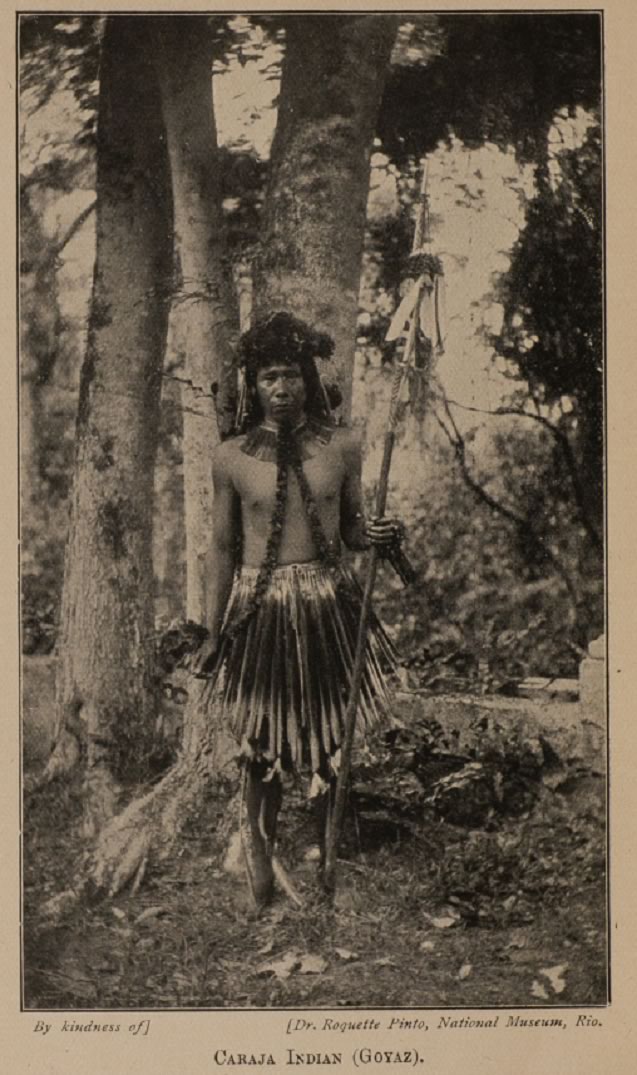 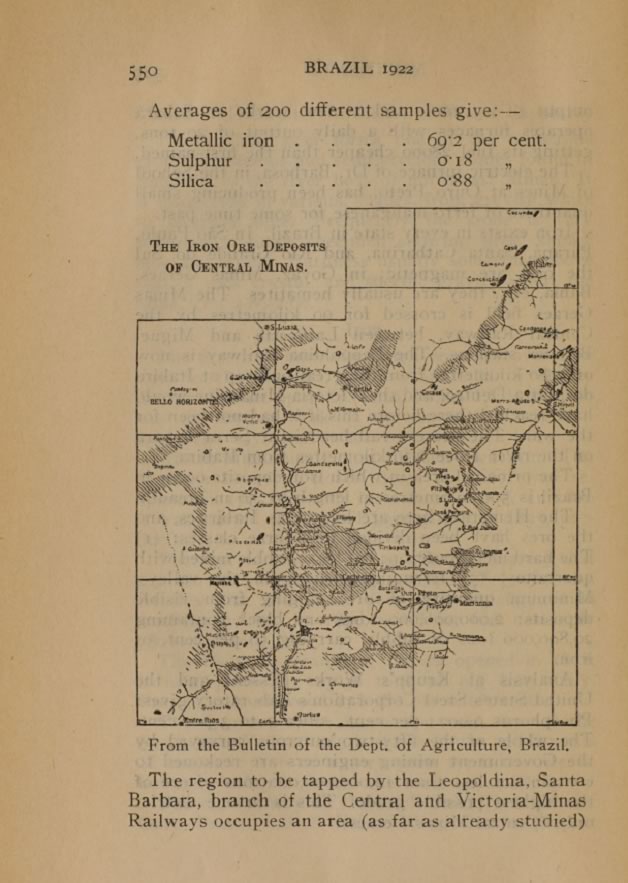 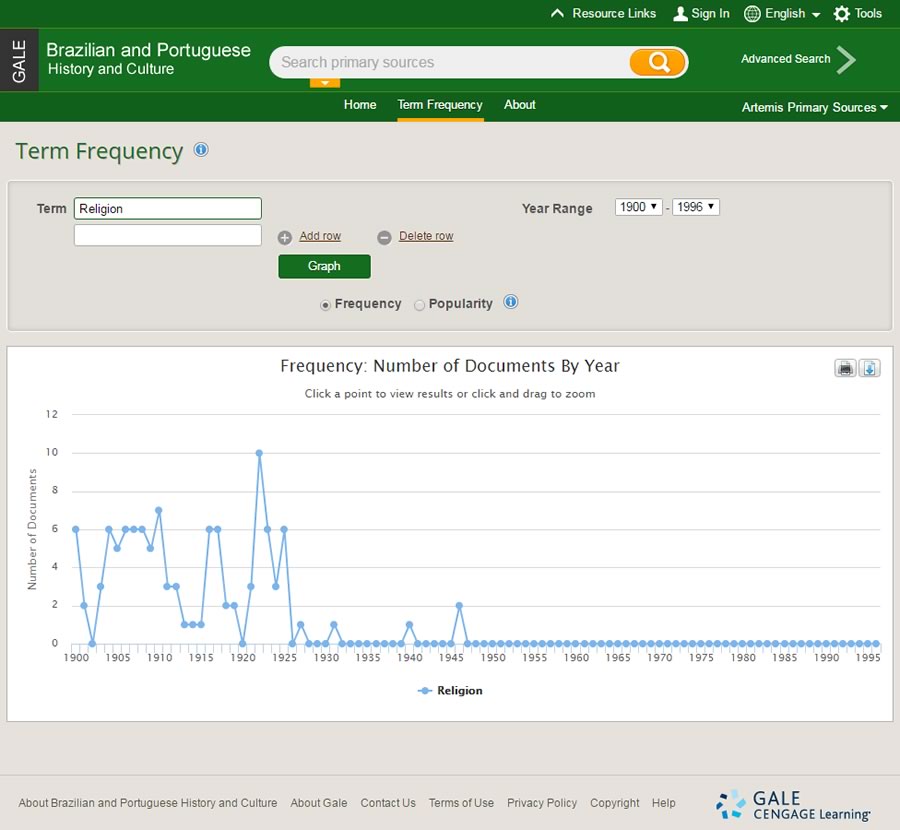 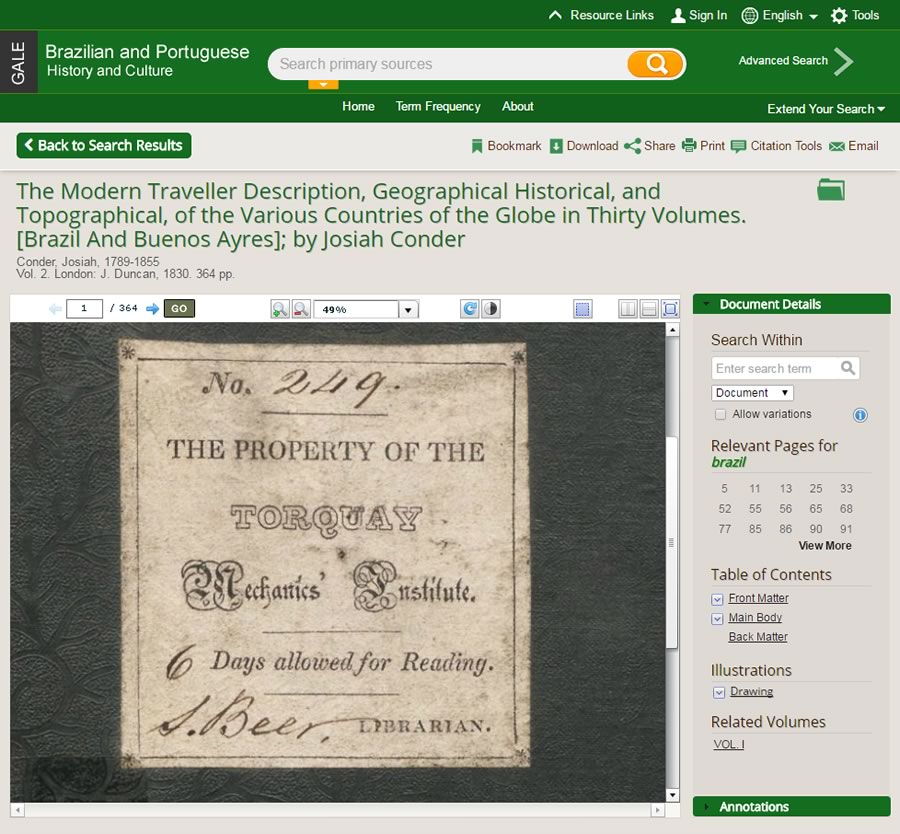