From Traditional to Alternative – Religious Movements Unique to America

Founded on the ideal of freedom, North America had a unique role as a birthplace for and spread of new religious movements. This new land provided religious freedom to dissenters and the opportunity to originate or significantly reshape movements that would become cornerstones of faith for years to come. Religions of America presents scholars and researchers with more than 660,000 pages of content that follow the development of religions and religious movements born in the United States from 1820 to 1990. Derived from numerous collections, most notably the American Religions Collection at the University of California, Santa Barbara, Religions of America traces the history and unique characteristics of movements and religious groups’ expressions of faith through manuscripts, pamphlets, newsletters, ephemera, and visuals.

Religions of America supports scholars in the discovery of primary source content that ranges far beyond a mere presentation of theological doctrine. The depth of coverage presents opportunities to explore revealing intersections of religion with economics, political science, history, law, sociology, psychology, gender studies, and numerous other fields. Whether it’s the redefinition of race that inspired the Moorish Science Temple of America, the countercultural sentiments that underwrote the Free Peoples Temple, the conflicts to established law presented by Mormon practices, or the separatist energy that invigorated Pentecostal Christianity before its transformative engagement with American politics, Religions of America presents the impact of new religious movements for years to come.

Cross-searchable with other Gale Primary Sources products, the subcollections in Religions of America include The American Religions Collection; The FBI Files on Jonestown, Moorish Science Temple of America, and the Branch Davidians; The Hall-Hoag Collection of Dissenting and Extremist Printed Propaganda; and Utah and the Mormons. Religions of America also draws on the largest multireligious collection of its kind, assembled by J. Gordon Melton, the premier scholar of twentieth-century Canadian and American religious life.

The Hall-Hoag Collection of Dissenting and Extremist Printed Propaganda from Brown University presents rare materials documenting Christian identity movements and anti-Semitic, white-supremacist interpretation of Christianity from their founding in the late 1940s until the 1990s.

Utah and the Mormons, based on materials from the Western Americana Collection at Yale University, includes periodicals, doctrinal, and controversial works largely from the nineteenth century that are pro- and anti-Mormon as well as contemporary works relating to the Latter-Day Saints.

EXPLORE ROOTS OF DISCOVERY AND DIVERSITY

FROM PRIMARY TO REGIONAL & LOCAL ORGANIZATIONS

Emphasizing twentieth-century materials, Religions of America focuses on religious movements and their main organizing bodies as well as offshoots among regional sects or local churches, such as:

Gale is honored to receive this prestigious award for Religions of America. Reviewer: J. Stoehr, CHOICE 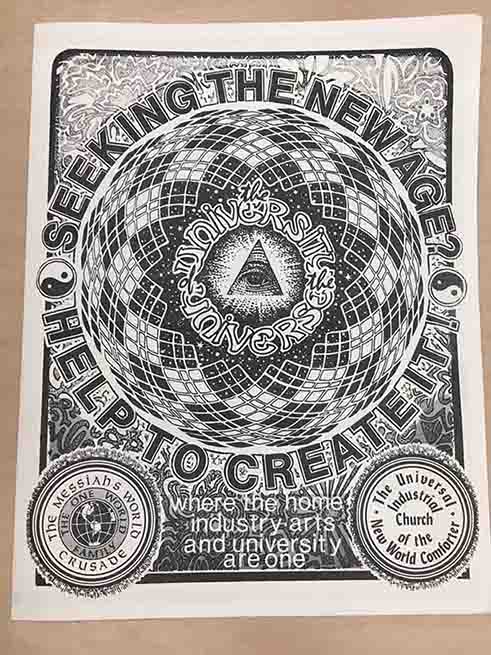 First propounded by Allen Michael Noonan in 1947, what started in 1967 as a “One World Family Commune” in San Francisco's Haight-Ashbury district, formalized itself in 1973, as the Universal Industrial Church of the New World Comforter. Through its publishing arm it produced a series of books that detail the teachings of the church as channeled through Allen Michael. 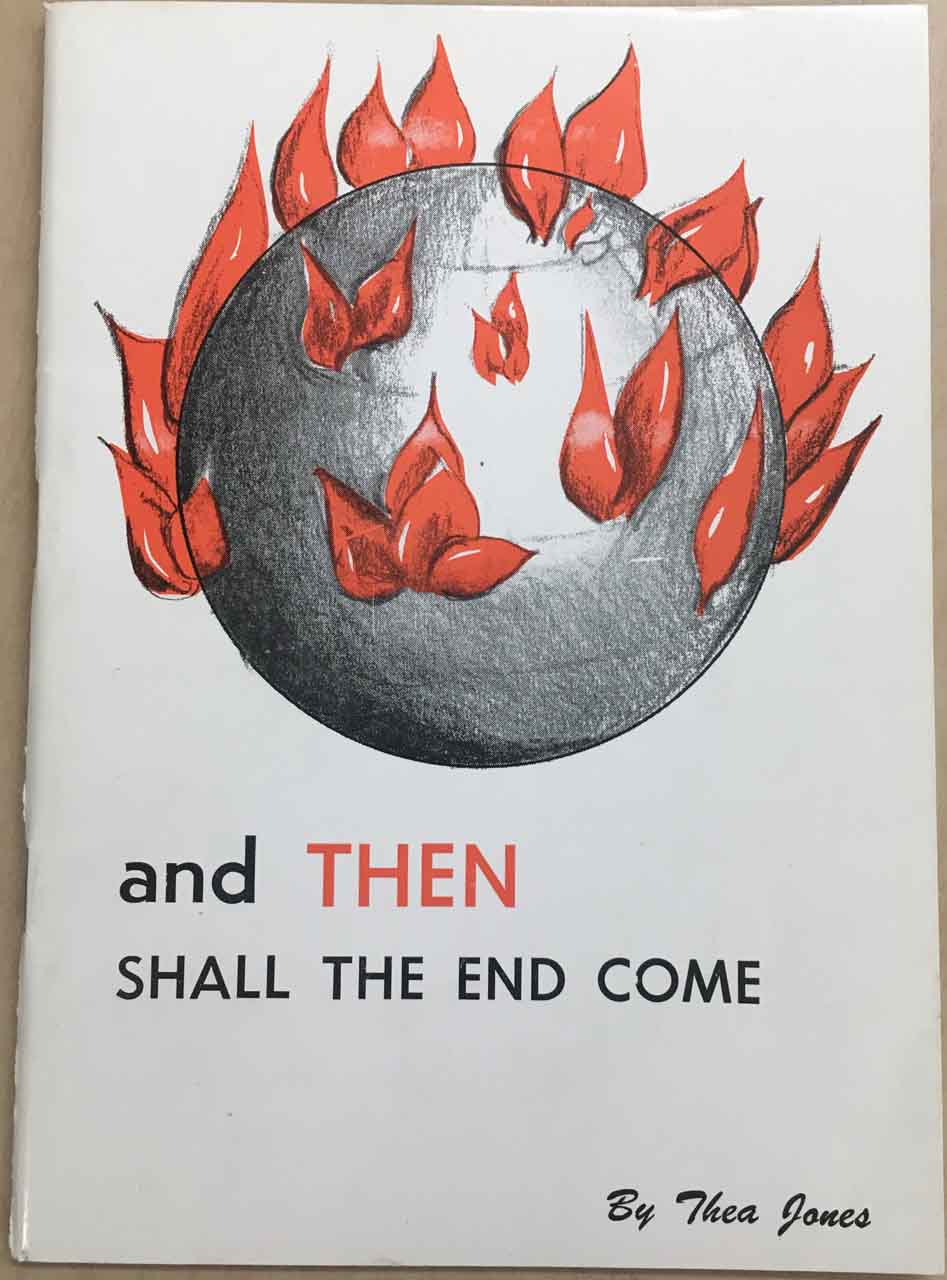 Thea Jones was an evangelist and television personality who produced radio and television programs and held revival services across the country when he was not presiding over his Philadelphia congregation. This is an undated title that he had authored. 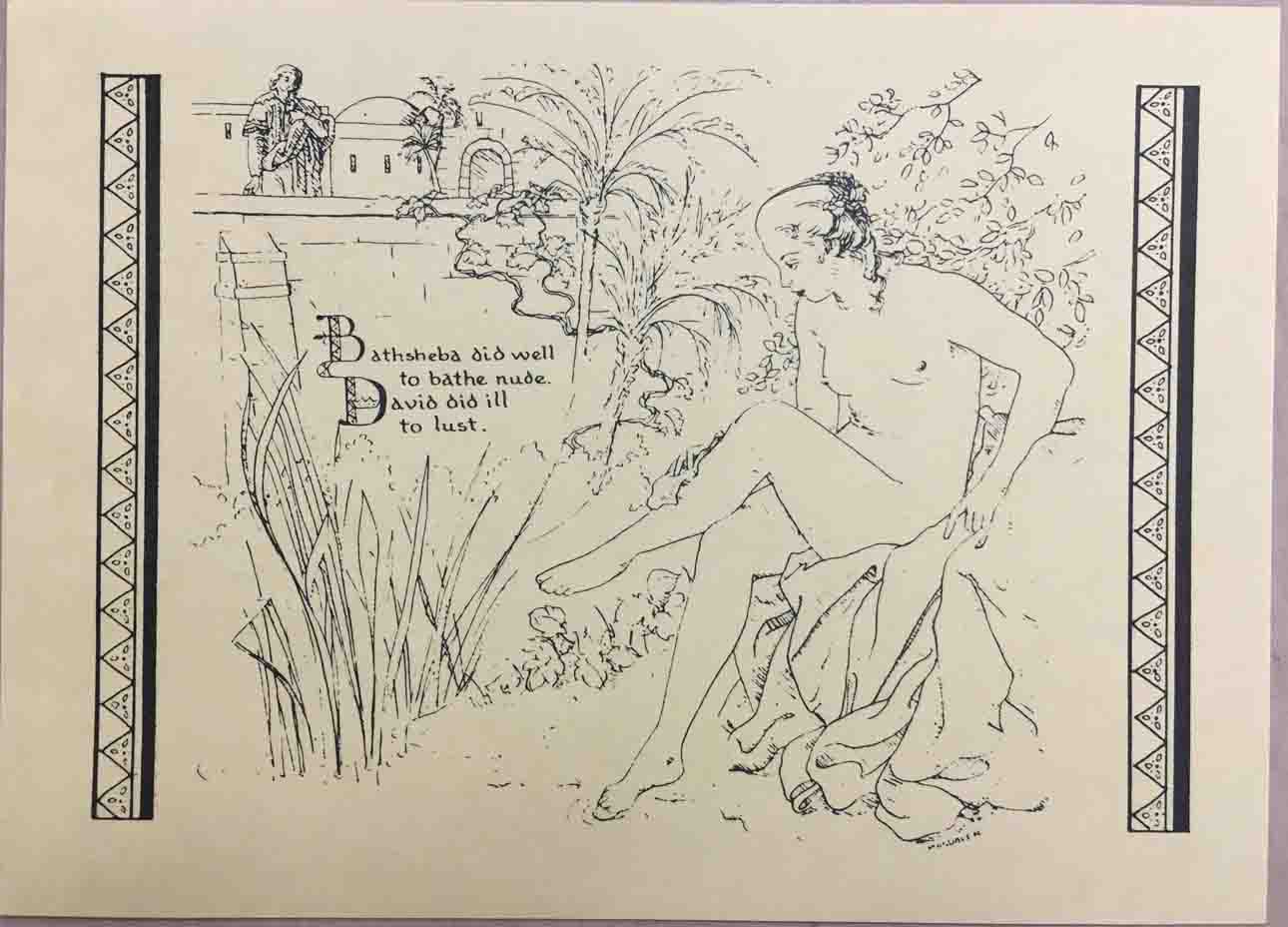 The Nudist Christian Church of the Blessed Virgin Jesus was founded in 185 by Zeus Cosmos. He claimed divine inspiration for authoring the Book of Zeus, which, in his theology, followed the Book of Revelation. In his interpretation, nudism reflected cleanliness, honesty, and freedom. 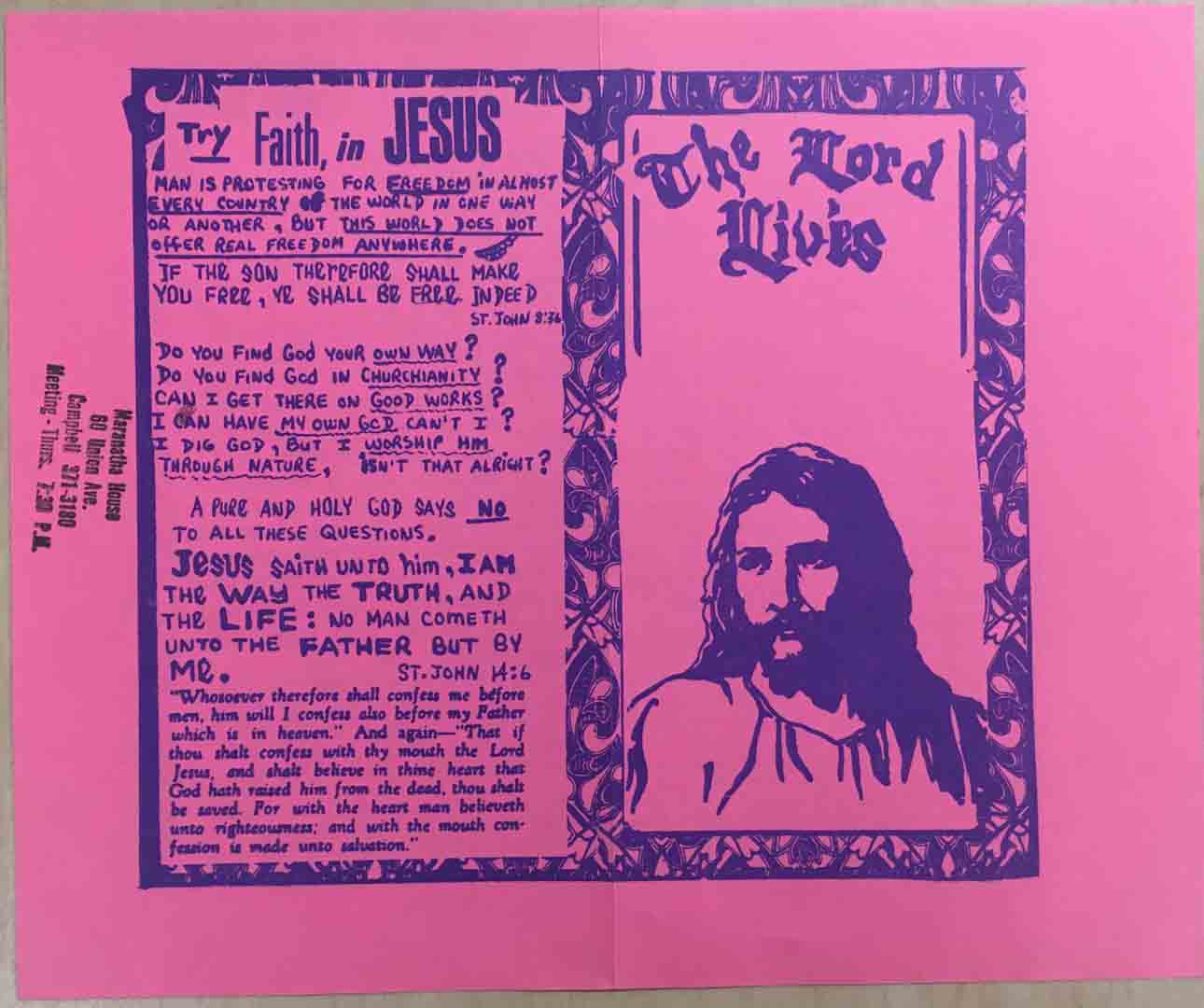 An undated flyer from Maranatha House, likely associated with the Pentecostal ministry founded by Bob Weiner in 1971 that focused on college-aged students. Maranatha is Aramaic for “our Lord is come.”

The Nudist Christian Church of the Blessed Virgin Jesus was founded in 185 by Zeus Cosmos. He claimed divine inspiration for authoring the Book of Zeus, which, in his theology, followed the Book of Revelation. In his interpretation, nudism reflected cleanliness, honesty, and freedom. 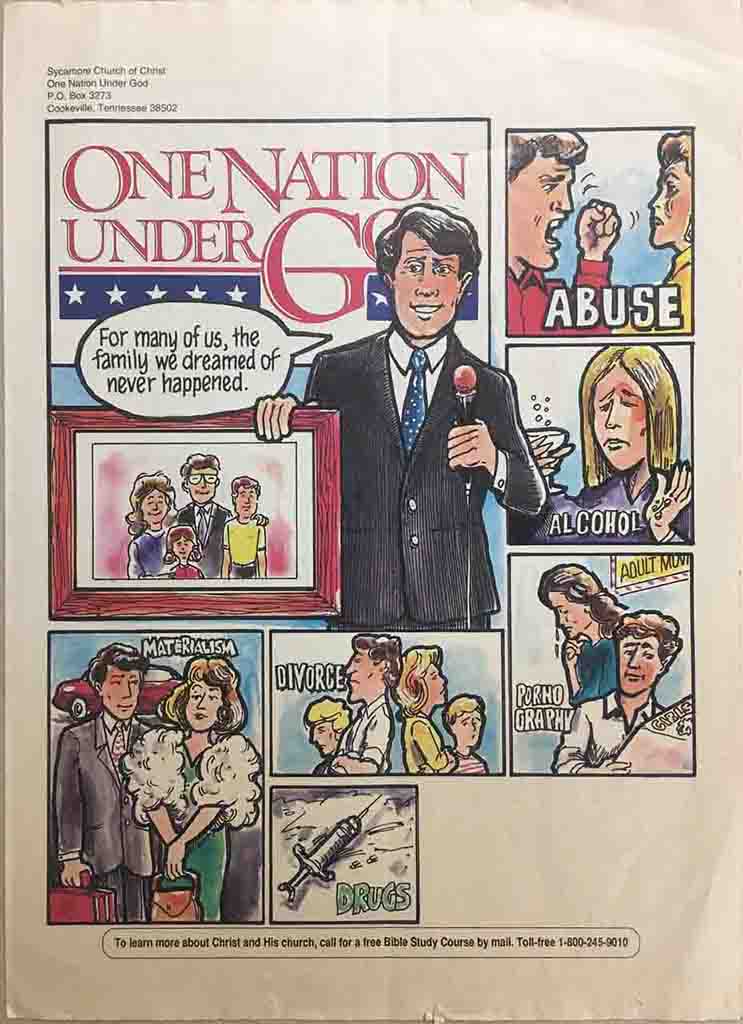 This mailing for the One Nation Under God campaign had been undertaken by the Sycamore Church of Christ in Cookeville, Tennessee. It was part of a multimillion-dollar national campaign to evangelize the United States. 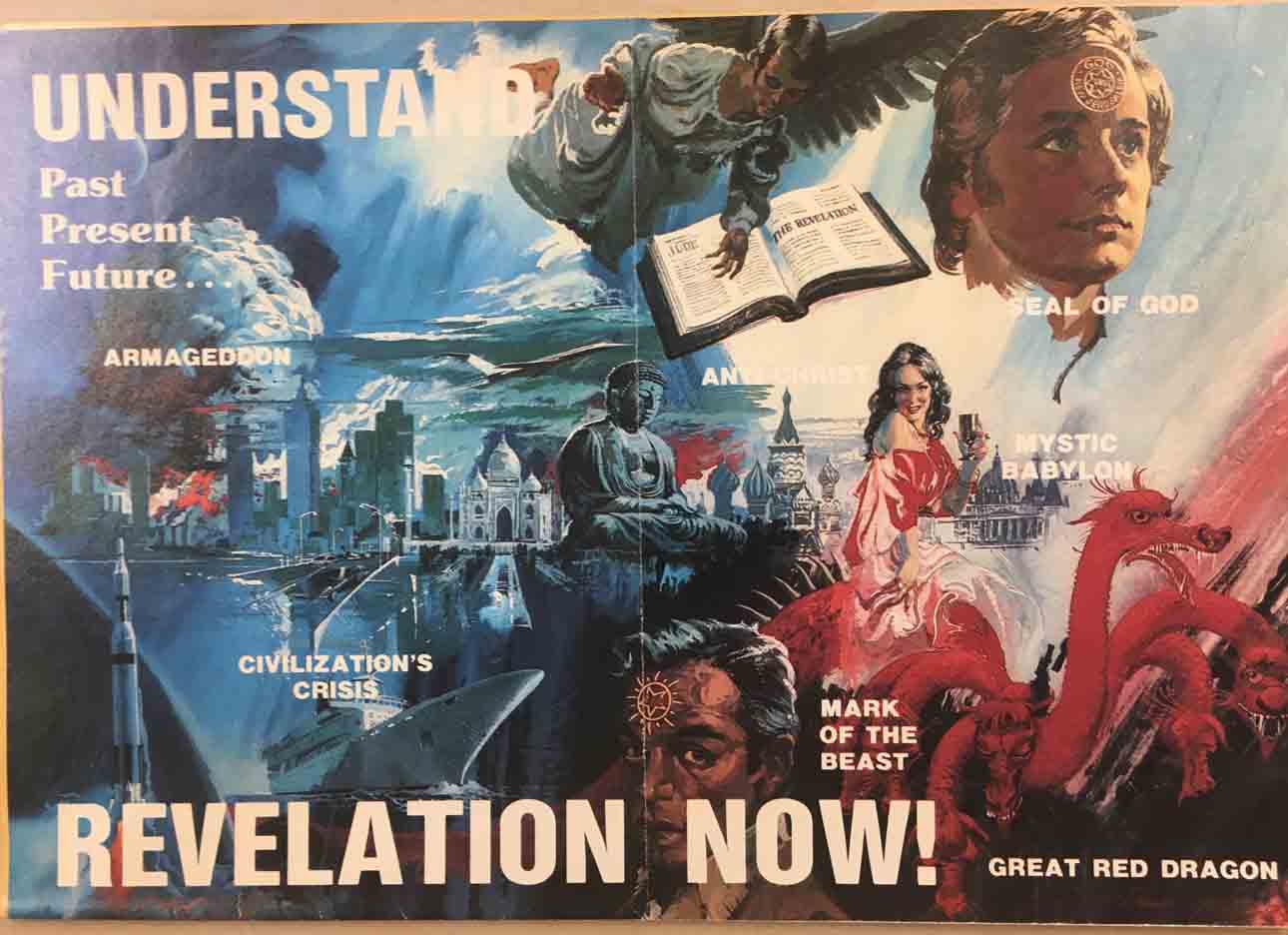 “Past, Present, Future” is a catch phrase and leitmotif within Adventist theology, based in part on the work of James Edson White’s 1909 book of that name. White was the son of Seventh Day Adventist founders James White and Ellen G. White. This undated advertisement is the centerfold insert of a pamphlet offering instructional materials and classes on its verso side. 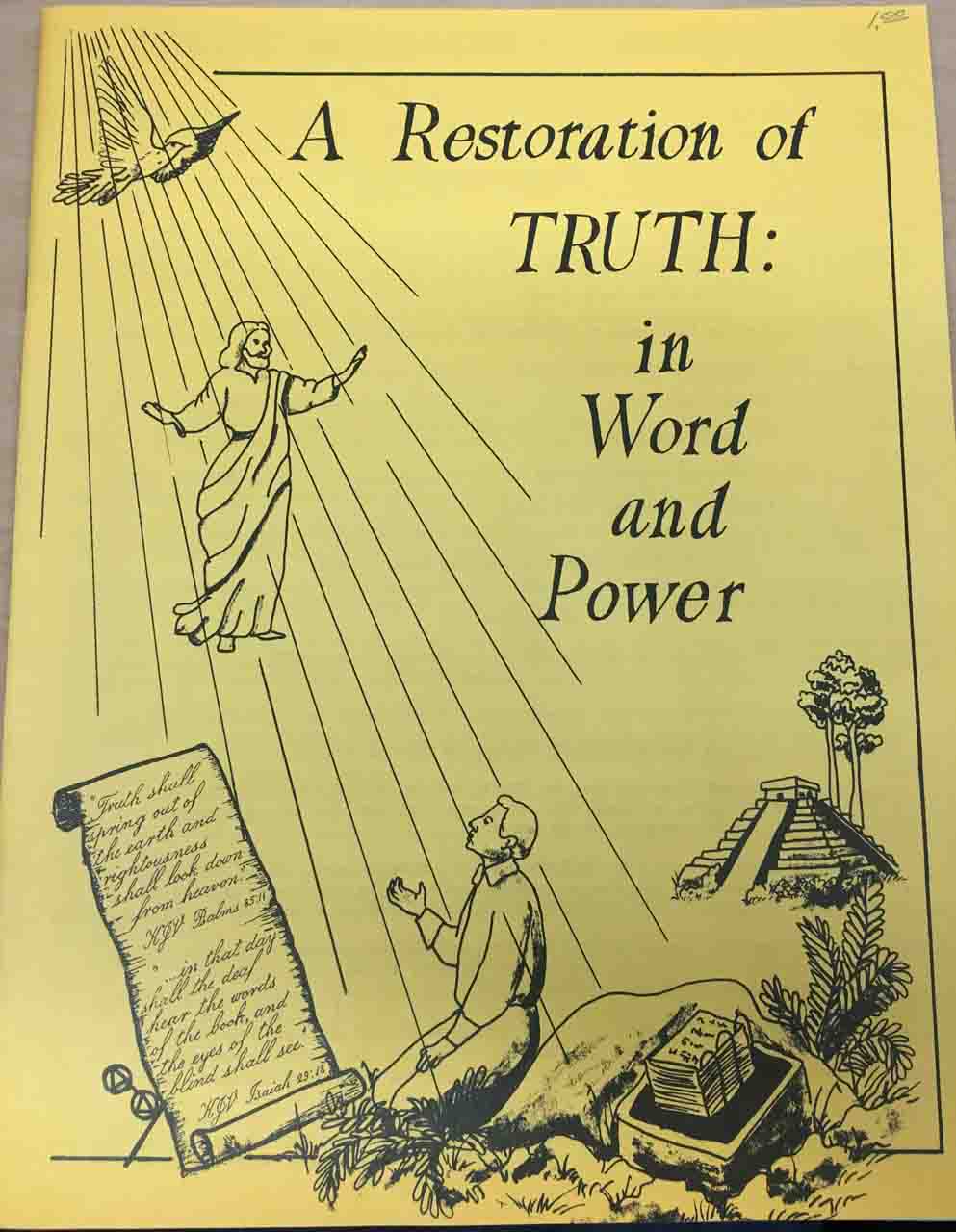 This work by Gary W. Metzger and Jon Tandy and contains doctrinal information and scriptural references regarding Christ's Church and the truth of the Book of Mormon.

“Religions of America makes available, in one place, many valuable primary sources one could not otherwise access without visiting several archives in person. Multiple advanced search options make it possible to zero in on relevant documents and publications, a task that would be difficult in browsing the original documents within archives…No other major commercial vendor offers a primary source collection on this exact topic.”