*Customers who purchase this archive after May 2018 will have the full archive from 1822-2016. Customers who previously purchased the original archive covering 1822-2006 can purchase the years 2007-2016 to extend their existing archive. Please note that the 2007-2016 module is only available as an add-on to institutions who have the original archive, and is not available as a standalone purchase.

The nineteenth-century run of the Sunday Times remains fairly inaccessible outside of this collection, and its content had been relatively unknown. For the first time, the Sunday Times Historical Archive 1822-2016 brings this wealth of rich, historical social and cultural content to researchers' fingertips.

The twentieth-century run of this newspaper is powerful in its hard-hitting and investigative journalism, with in-depth information and widely researched, long-term news stories. It is an important resource for all humanities and social sciences courses, especially in history, media studies/journalism, literature, cultural studies, politics, and performing arts.

The Sunday Times Historical Archive 1822-2016 brings two centuries of news together in one resource, providing the complete run of the newspaper and its supplements, in one cross-searchable and browseable platform.

It is the perfect complement to Gale's other newspaper collections, including The Times Digital Archive, The Listener Historical Archive, the Times Literary Supplement Historical Archive, British Library Newspapers, and many more. The ability to cross-search these well-known titles alongside the Sunday Times provides an unmatched discovery experience for the user.

*Despite the similarity of names, the Sunday Times was an entirely separate paper from The Times until 1966, when both papers came under common ownership. To this day, the Sunday Times remains editorially independent from the Times, with its own remit and perspective on the news.

The Sunday Times is famous for many of its stories, including Kim Philby's outing as a Soviet spy, the thalidomide investigation, and the publishing of Adolph Hitler's diaries.

In 1967, the Sunday Times recorded one of the greatest coups in journalism, confronting the former MI6 agent Kim Philby in Moscow and outing him as a Soviet spy. Over three decades, Philby's duplicity had almost certainly led to the loss of several British agents and Russian defectors, along with the exposure of many state secrets, yet the secret services were strongly suspected of a cover-up. Running over several weeks, the scoop caused a sensation and rocked the establishment.

Initially prescribed to pregnant women to treat morning sickness, thalidomide was withdrawn from the market in 1961, following reports that it was linked to a number of birth defects. The Sunday Times spent a decade campaigning for compensation for the victims, providing case studies and evidence of the tragic side-effects of the drug. The tireless efforts of the paper paid off in 1968, when the Distillers Company, which was responsible for the manufacture of thalidomide in the United Kingdom, agreed to a multi-million pound payout for the victims.

Hitler Diaries: The Sunday Times was caught up in one of the greatest frauds of the twentieth century when it signed a deal in 1983 with the German magazine Stern to publish a newly discovered collection of personal documents purportedly written by Adolph Hitler termed the "Hitler Diaries," which had been acquired by Stern. Although initially authenticated by the historian Hugh Trevor-Roper, the diaries were quickly discovered to be crude forgeries. The Sunday Times defended the authenticity of the diaries for two weeks before eventually conceding that it had been duped.

This collection is also a valuable resource for family history and genealogy. Included are regular columns announcing births, deaths, and marriages. 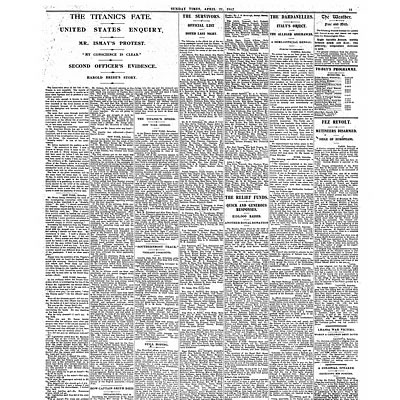 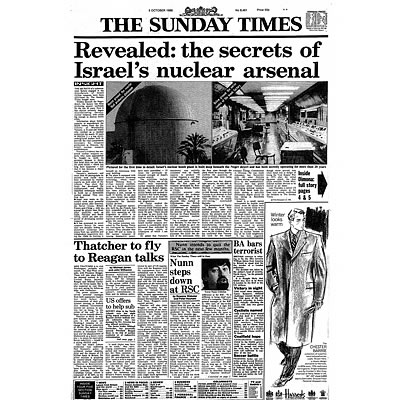 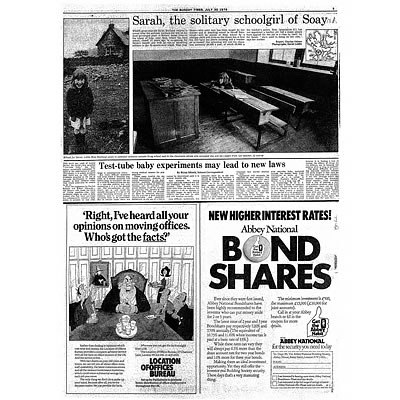 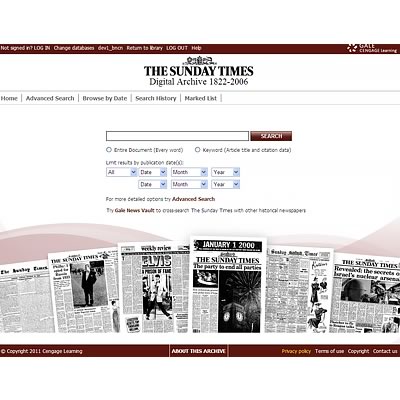