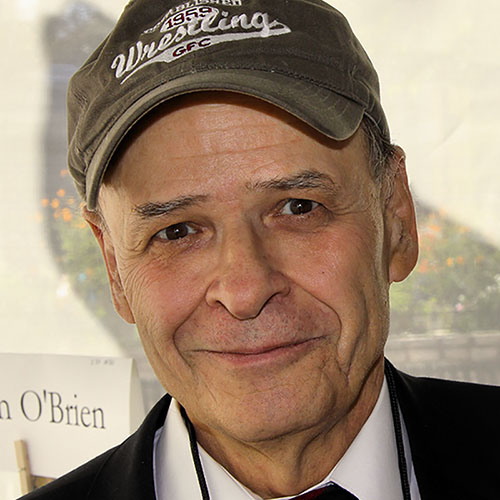 Tim O’Brien is an American writer and Vietnam veteran whose best-known work, The Things They Carried, explores themes of physical and emotional burdens and the truthfulness of stories. Read the overview below to gain an understanding of the author and his work and explore the previews of analysis and criticism that invite further interpretation.

Tim O'Brien is widely regarded as a leading figure in contemporary American literature. A veteran of the Vietnam War, he is primarily known for recounting his experience in Vietnam with careful attention to literary details. Many critics consider him the most prominent author within the field of Vietnam War writers. His memoir, If I Die in a Combat Zone, Box Me up and Ship Me Home (1973), is praised as a masterful chronicle of the Vietnam War experience while Going after Cacciato (1978) has been hailed as one of the best novels dealing with the conflict. O'Brien's work often focuses on personal guilt stemming from participating in a war that he did not ethically support. He considered various alternatives, but ultimately fought in Vietnam. In a 1994 New York Times magazine essay, O'Brien wrote of his decision: "I thought about Canada. I thought about jail. But in the end I could not bear the prospect of rejection: by my family, my country, my friends, my hometown. ... I was a coward. I went to Vietnam."

O'Brien's writing is characterized by a continual blurring of the distinctions between truth and fiction, seeking to highlight the differences between story-telling and truth-telling, but leaving that distinction open to interpretation. Later novels, such as Tomcat in Love (1998) and July, July (2002), have moved away from the subject of the Vietnam War, though echoes of O'Brien's experiences still persist in these works.

Born in 1946 to William T. O'Brien and Ava Schulz O'Brien in Austin, Minnesota, O'Brien was raised in Worthington, Minnesota. He graduated from Macalester College in St. Paul, earning a degree in political science in 1968, and was then drafted into the military. O'Brien trained at Fort Lewis, Washington, and served with the 198th Infantry, known as Alpha Company. O'Brien dedicated his most popular book, The Things They Carried (1990), to the men of Alpha Company. He was sent to the Quang Ngai region near My Lai one year after the infamous massacre there and served as a foot soldier in Vietnam from 1969 to 1970. He was wounded and awarded the Purple Heart.

Upon discharge from the army, O'Brien attended graduate school at Harvard University but left in 1976 without completing the Ph.D. program. He served as an intern at the Washington Post and later worked there as a national affairs reporter. Once his publishing career was established, he concentrated solely on writing. If I Die in a Combat Zone, Box Me up and Ship Me Home, a book of memoirs that also reveals considerable emphasis on fictional technique, was a popular as well as a critical success. This series of vignettes reflects O'Brien's experience as a foot soldier and struck a chord with a wide public for both its autobiographical nature and evocative language. Northern Lights (1975) was published next, followed by Going after Cacciato, a novel that gave him a permanent foothold in American literature and received the 1979 National Book Award in Fiction.

His next book, The Nuclear Age (1985), addresses the Cold War and the potential for a nuclear attack on the United States at the time. O'Brien followed it with The Things They Carried, a collection of short stories that many critics consider a novel, given the interwoven nature of the individual stories. Depicting the men of Alpha Company and a character named Tim O'Brien, The Things They Carried won France's prestigious Prix du Meilleur Livre Etranger, the Chicago Tribune's Heartland Prize, and was nominated for the Pulitzer Prize. In the Lake of the Woods (1994) takes place after the Vietnam War. It received the James Fenimore Cooper Prize from the Society of American Historians and was selected as the best work of fiction of 1994 by Time magazine. O'Brien holds the Roy F. and Joann Cole Mitte Chair in Creative Writing on alternating years at Texas State University, and he has been a member of the graduate program with the Creative Writing faculty since 1999.

If I Die in a Combat Zone, Box Me up and Ship Me Home appeals to both those with connections to the war and those outside it. Comprising stories that O'Brien worked on for years, the book startled readers and critics alike with the author's unique voice. Explorations of the blurring of truth and fiction and examinations of the intent behind the act of writing are featured in the book and have been ongoing themes in O'Brien's later works.

Northern Lights does not take place in Vietnam but treats the aftermath of the war within the household of two brothers--one who has returned home from the war wounded, and another who remained in their father's house and opposed the war. The book treats the concepts of home, duty, and the ability to exceed expectations within a tale of the relationship between the brothers and the ancestral legacy that haunts them. Interestingly, the hero's role is not embodied by the returning war veteran but by the intellectual married brother who must make a difficult decision.

Going after Cacciato is a surrealistic tale of a platoon of soldiers, led by Paul Berlin, who pursue a member from their ranks who has deserted and is walking to Paris. The events of this trek, as well as the pursuit itself, take place within the mind of Berlin, who plays out the fantastical story in his head over a short period, with reality and fantasy blending in a unique and ambitious attempt to explore both the horrors of war and escape from it. Comparisons to early modernist literature, especially works of Ernest Hemingway, appeared in critics' responses to this book, with reviewers also noting the influence of the genre of magic realism. The country of Vietnam merely serves as the background scenery against which a complex novel takes place. The Nuclear Age did not meet with widespread critical approval, though some critics applauded O'Brien's attempt to address broader issues of family, identity, and paranoia within American culture.

The Things They Carried has been hailed as a brilliant collection of stories that can be read individually and as part of a continuous thread. Character Tim O'Brien narrates stories that take place both during wartime and twenty years later, as both a foot soldier and a writer attempting to express his feelings about those experiences. In the Lake of the Woods features a character named John Wade who has just seen his political career destroyed by the public revelation of his presence at the My Lai massacre--a fact he worked hard to hide. O'Brien does not provide definitive answers to certain plot questions--an element that prompted discomfort among some reviewers. Details concerning how Wade and his wife cope with the revelation and the cover-up, pointing out the inability to truly know another person, are left unresolved.

Tomcat in Love is regarded as a comic novel featuring a stereotypical protagonist who embodies such traits as vanity, selfishness, and a desire for vengeance. In July, July a group of friends gather for a thirtieth reunion. This novel focuses on exploring their disillusionment as middle-aged adults grappling with loss.

Critics have noted O'Brien's desire to branch out into broader themes within his work--for example, conflict among family members, betrayal, gender conflict, loss of faith, and social ideology. In her review of Tomcat in Love, Grace Paley found O'Brien's attempt to address such themes as madness and personal conflict against a senseless world disappointing. However, Paley lauds the author for "... pouring these important concerns into fiction, which is not fed often enough with such disparate and essential themes."

July, July did not receive universal acclaim, but some critics appreciated O'Brien's examination of the baby boomer generation and the theme of disillusionment. Reviewer David Gates wrote that "O'Brien comes as close as any American fiction writer to having a lock on this decade and its survivors." Going after Cacciato, If I Die in a Combat Zone, and The Things They Carried have all been widely praised as canonical works within the genre of American war literature.

Throughout his career O'Brien has been hailed as a postmodern novelist, a natural outgrowth of what some consider a postmodern war. His overt references to his stories as both artifact and truth have caused him to be labeled a metafictional writer, a label that continues to engage critics. Scholars have noted that truth, artifact, illusion, and fantasy are vehicles through which O'Brien explores the troubling nature of reality, knowledge, and the healing power of literature. Commenting on this element of O'Brien's writing as evidenced in the short story "Spin," Robin Blyn wrote: "[the story] offers the ambiguous, the unfinished, and the wound that will not succumb to the narrative cure. Keeping the wound open, O'Brien's text prevents the neat closure and false redemption of the traditional war story."

The Things They Carried

Kaplan contends that in The Things They Carried, Tim O'Brien "emphasizes the magical powers of storytelling," incorporating both factual writing and memoir to create fiction that is "truer than fact."

In the following blended interview, which incorporates selections from Herzog's 1995 and 2005 conversations with O'Brien, the author discusses his childhood, his life as a soldier, and his work as a writer of war fiction.

Salvation, Storytelling, and Pilgrimage in Tim O'Brien's The Things They Carried

Vernon considers Tim O'Brien's The Things They Carried in relation to John Bunyan's The Pilgrim's Progress, viewing the former "as a mechanism for questioning the possibility of spiritual gain through waging modern war."

Kaplan perceives The Things They Carried to be O'Brien's imaginative attempt to reveal and understand the uncertainties about the Vietnam War.

Taylor focuses his analysis of O'Brien's short fiction on three parts of the collection The Things They Carried, tracing the development of these works over time in terms of theme and imagery.