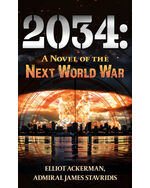 On March 12, 2034, Commodore Sarah Hunt is on the bridge of her flagship, the USS John Paul Jones, conducting a routine patrol in the South China Sea. On that same day, Major Chris "Wedge" Mitchell is flying an F35E Lightning over the Strait of Hormuz. By the end of that day, Wedge will be an Iranian prisoner, and Sarah Hunt’s destroyer will lie at the bottom of the sea. Iran and China have coordinated their moves, which involve the use of powerful new forms of cyber weaponry. In a single day, America’s strategic pre-eminence is in tatters. A new, terrifying era is at hand.

“Shogan . . . bolsters her tale with an insider’s knowledge of the ways of Washington.”

“. . . Dillon’s debut novel is heartwarming to its core. With a widely diverse cast of supporting characters, author Dillon brings Bed-Stuy to life. Realistic in scope and pious without being preachy, MERCY HOUSE will appeal to fans of Naomi Ragen’s THE DEVIL IN JERUSALEM (2015) and Autumn J. Bright’s LOVELY (2017).”