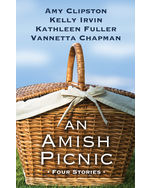 In Amy Clipston’s Baskets of Sunshine, Kevin Weaver and Phoebe Kurtz must decide whether to take a chance on love, despite their age difference. In Kelly Irvin’s Candlelight Sweethearts Esther Marie Shrock and Jasper Cotter bond during a grocery store power outage. In Kathleen Fuller’s Reeling in Love, fishing buddies Nina Stoll and Ira Yoder need some prodding to realize they’re each other's perfect catch. In Vannetta Chapman’s Picnics and Prospects, Faith Troyer and David Lapp investigate a mystery involving old letters, which causes them to rethink their past — including a disastrous date — and consider their future.