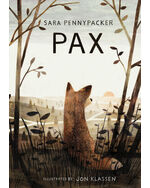 Pax was only a kit when his family was killed, rescued by “his boy,” Peter, from abandonment and certain death. Now the war front approaches, and when Peter’s father enlists, Peter has to move in with his grandfather. Far worse than being forced to leave home is the fact that Pax can’t go. Peter obeys his stern father and agrees to release Pax back into the wild. But before Peter makes it through even one night under his grandfather’s roof, regret and duty spur him to action; he sneaks out into the night, determined to find his beloved friend. This is the story of Peter, Pax, and their independent struggles to return to each other in the face of war.

“A startling work of fiction that should be read-and discussed-by children and adults alike.”