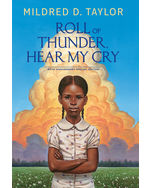 Set in Mississippi at the height of the Depression, this is the story of one family’s struggle to maintain their integrity, pride, and independence in the face of racism and social injustice. It is also the story of an important year of discovery in the life of young Cassie Logan.

“The vivid story of a black family whose warm ties to each other and their land give them strength to defy rural Southern racism during the Depression. . . . Entirely through its own internal development, the novel shows the rich inner rewards of black pride, love, and independence despite the certainty of outer defeat.”

“The strong, clear-headed Logan family . . . are drawn with quiet affection and their actions tempered with a keen sense of human fallibility.”

“Taylor's story about Cassie and her family, set in southern Mississippi during the Great Depression, is one of those rare books that is beloved by educators and children alike. A perennially popular selection for summer reading lists, classroom discussion, and book clubs, it turns 40 this year and boy does 40 look good on this classic. Sporting a stunning new cover illustration by Kadir Nelson and an introduction by Jacqueline Woodson, this is a beautiful edition that will be embraced by longtime fans and entice a new generation of readers.”