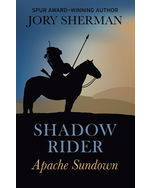 Driven equally by his duty to his nation's leader and by his need to avenge his father's murder, Zak Cody is on the trail of the gold-hungry killer who made him an orphan. But while he's taking down his adversary's hired guns every step of the way, their leader, Ben Trask, continues to elude him. And Trask is brewing up a poisonous stew of betrayal, death, and lies with the help of someone at Fort Bowie — a plan that will bring about the slaughter of a proud but volatile native people. Cody must battle time, bullets, and savage nature to reach the one man who might help him prevent a massacre — the warrior named Cochise.