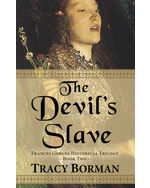 In the new Puritan regime of King James I, whispers of conspiracies echo behind closed doors and down the halls of the royal palaces. Against this perilous backdrop, Frances Gorges reunites with her former mistress, the Princess Elizabeth, as well as other less friendly members of the court: Prince Henry, who emulates his father’s brutality without scruple; Lord Cecil, eager to persecute Frances as a witch; and King James himself. Yet a surprising ally emerges in the person of Sir Walter Raleigh, himself a prisoner in the Tower of London. With more lives than her own on the line, Frances soon finds herself caught in a spider’s web of secrets, promises, and plots.