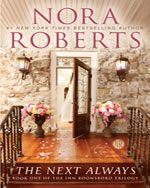 In The Next Always Nora Roberts introduces the Montgomery brothers — Beckett‚ Ryder‚ and Owen — as they bring an intimate bed-and-breakfast to life in their hometown.

The old hotel in BoonsBoro has endured war and peace‚ changing hands‚ even rumored hauntings. Now it’s getting a major facelift from the Montgomery brothers and their eccentric mother. As the architect of the family‚ Beckett’s social life consists mostly of talking shop over pizza and beer. But there’s another project he’s got his eye on: Clare Brewster‚ the girl he’s been waiting to kiss since he was fifteen.