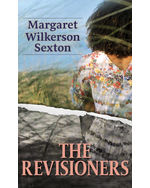 In 1924, Josephine is the owner of a thriving farm. As a child, she channeled otherworldly power to free herself from slavery. Now her neighbor, a white woman named Charlotte, seeks her company, and an uneasy friendship grows between them. But Charlotte has also sought solace in the Ku Klux Klan, a relationship that jeopardizes Josephine’s family. Nearly one hundred years later, Josephine’s descendant, Ava, is a single mother who has lost her job. She moves in with her white grandmother, Martha, a wealthy but lonely woman who pays Ava to be her companion. But Martha’s behavior soon becomes threatening, and Ava must escape before her story and Josephine’s converge.