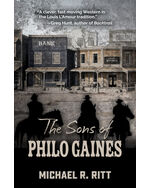 
The Sons of Philo Gaines

Philo Gaines is a legend — mountain man, Indian fighter, Texas Ranger and army scout. Philo is one other thing — a father with three sons; a scholar, a gambler, and a gunman. Each one is trying to leave his own mark on a hard land that requires the best out of hard men. In September 1873, Matthew Gaines arrives in the west Texas town of Mustang Flats. A quiet scholar, Matthew leaves Princeton to become the town’s new school teacher. Haunted by a past he can’t seem to outrun, he discovers an unexpected connection to his own family in Mustang Flats — a secret that could cost him his life and brings his brothers heading toward Mustang Flats and a showdown with destiny.