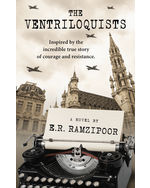 Brussels, 1943. Twelve-year-old street orphan Helene survives by selling copies of the country’s most popular newspaper, Le Soir, now turned into Nazi propaganda. Helene befriends a rogue journalist, Marc Aubrion, who draws her into a secret network that publishes dissident underground newspapers. The Nazis track down Aubrion’s team and give them an impossible choice: turn the resistance newspapers into a Nazi propaganda bomb that will sway public opinion against the Allies, or be killed. Instead, they decide to publish a fake edition of Le Soir that pokes fun at Hitler and Stalin. They have agreed to die for a joke, and they have only eighteen days to tell it.