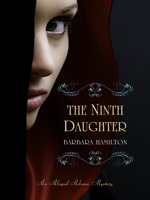 1773: The Massachusetts Colony is torn between patriots who want independence and loyalists who support the King. At the center is the educated and beautiful Abigail Adams — wife of John Adams‚ the leader of the Sons of Liberty‚ a secret organization opposing the Crown. When a murder occurs in the home of their friend and fellow patriot‚ John is accused and Abby must uncover a conspiracy that could cost them their freedom.

“Exceptional … Historical fans will eagerly look forward to the next in this promising series.” — starred‚ Publishers Weekly