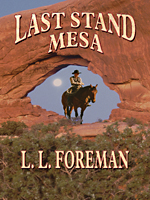 Mike McLean‚ often as not‚ found himself in trouble with the law. And — as was usually the case — it was because he took on other people’s troubles along with his own. Now‚ Mike had come to the rescue of an old friend who had seen better days. But then‚ in so doing‚ he came head on against a gang of murdering rustlers — whose leader had sworn to kill him.