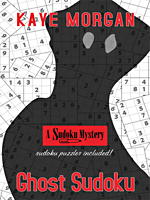 After spending two weeks hiding out from the media for some R & R‚ Liza returns home to find her PR still going strong. She knows she has some fans in the Sudoku world‚ but who would plaster her face all over town with the slogan Kelly for Mayor? Liza’s neighboring town is run by a dirty political machine. When she turns to an old classmate to see if the machine is behind these political shenanigans‚ Liza discovers that he’s been murdered.

“You do not need to be a fan of Sudoku to enjoy the mystery, but if you are, you’ll enjoy solving the puzzles and tips scattered throughout the story.” — CA Reviews