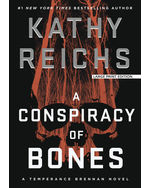 A Conspiracy of Bones

Temperance Brennan is in North Carolina, recovering from neurosurgery, when she receives a series of mysterious text messages, each with a picture of a corpse missing its face and hands. Determined to identify the dead man, she sidesteps the new boss who wants to keep her off the case. Tempe discovers disturbing and confusing clues. Was the faceless man a spy? A trafficker? An assassination target? And why was he carrying the name of a missing child? With help from her Montreal beau Andrew Ryan and ex-homicide investigator Skinny Slidell, Tempe utilizes cutting-edge forensic methods to draw closer to the astonishing truth.