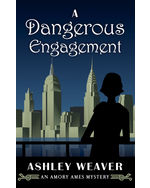 Amory Ames is excited to be a bridesmaid at her childhood friend Tabitha’s wedding in New York. But then a member of the wedding party is found murdered. Amory discovers that the dead groomsman has links to the notorious gangster Leon De Lora, and soon Amory and her husband, Milo, find themselves pulled into another mystery. In an unfamiliar city, not knowing who they can trust, Amory and Milo are drawn into the glamorous, dangerous world of nightclubs and bootleggers. But as they draw closer to unraveling the web of lies and half-truths the murdered man has left in his wake, the killer is weaving a web of his own.