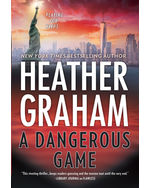 Wrapping up a normal day at the office, criminal psychologist Kieran Finnegan is accosted by a desperate woman who shoves an infant into her arms and then flees, only to be murdered minutes later on a busy Manhattan street. Who was she? Kieran can’t stop thinking about the child and the victim, so her boyfriend, Craig Frasier, does what any good special agent boyfriend would do — he gets the FBI involved. And asks Kieran to keep out of it.