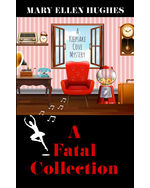 Callie Reed pays a long overdue visit to her aunt, Melodie, at her fairy-tale cottage in quaint Keepsake Cove, home to a bevy of collectible shops on Maryland’s Eastern Shore. Just as they begin to reconnect, Callie discovers her aunt’s body on the floor of her music box shop. Grief-stricken, she can’t accept Melodie’s death being ruled accidental. Why was she in the shop in the middle of the night? As Callie searches for the truth, signs seem to come from her late aunt through a favorite music box. Or are they warnings?