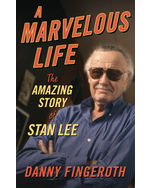 A Marvelous Life: The Amazing Story of Stan Lee

Stan Lee was the most famous American comic book creator who ever lived. Lee was ― and even after his 2018 death, still is ― the voice and face of comics, and Marvel Comics in particular. How he got to that place is a story that has never been fully told ― until now. With creative partners including Jack Kirby and Steve Ditko ― with whom he had tempestuous relationships ― Lee created world-famous characters. But Lee’s career was haunted by conflict and controversy. Was he the most innovative creator to ever do comics? Was he a lucky no-talent whose only skill was taking credit for others’ work? Or was he something else altogether?