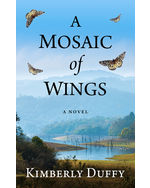 
A Mosaic of Wings

It’s 1885, and all Nora Shipley wants after graduating from college is to take over the scientific journal her late father started. She joins a research expedition in India, to prove herself in the field. India isn’t what she expects, though, and neither is the rival classmate who accompanies her, Owen Epps. As her preconceptions of India — and of Owen — fall away, she finds both far more captivating than she expected. Nora befriends Sita, a young Indian girl who has been dedicated to a goddess against her will. Nora must now choose between saving Sita and saving her career, and between what she’s always thought she wanted and the man she’s come to love.

“From the picturesque falls of Upstate New York to stunning sites in India, Duffy shines in elegant, flowing prose and delicate precision that underscores the nineteenth-century setting. A MOSAIC OF WINGS examines the rhythm of change, the sense of loss that accompanies a passing season, and fear and excitement of journeying into the unknown. Science, culture, and romance intersect enjoyably in Duffy’s tale of academia, while the tensions of gender and social norms circa 1885 add complexity to her memorable characters.”

“Duffy is an author to watch. She presents a unique look at society’s expectations for women in two different cultures in the late 19th century. . . . This historical romance is recommended for readers of Tracie Peterson and Jody Hedlund.”