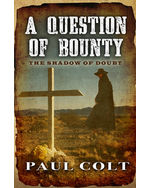 A Question of Bounty: The Shadow of Doubt

Sheriff Pat Garrett claimed that he killed Billy the Kid on July 14‚ 1881. His deputy‚ John Poe‚ and others suggest that he killed the wrong man and covered it up. The controversy persists. A Question of Bounty follows Billy the Kid’s outlaw adventures right to John Poe’s version of his fateful encounter with Pat Garrett. The story concludes with the life of a mysterious stranger that begins three weeks after the Kid’s reported death.

"You wouldn't think anything was left to say about Billy the Kid, but Colt turns in a methodical, at times brilliant, account . . . Devotees of the never-quite-resolved story will be much intrigued."