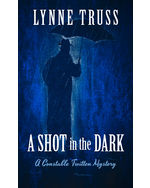 A Shot in the Dark

It’s 1957, and famed theater critic A. S. Crystal has come to the British seaside resort of Brighton with something other than the local production of A Shilling in the Meter on his mind. Sitting in the Brighton Royal Theater with Constable Twitten, Crystal intends to tell the detective what he knows about the unsolved Aldersgate Stick-Up case of 1945. And then he’s shot dead in his seat.

With a new murder case on his hands and a fatuous, lazy captain at the helm of the police department, the keen and clever Constable Twitten and his colleague Sergeant Jim Brunswick set out to solve the decade-old mystery.