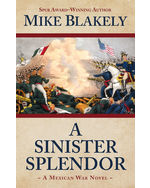 1845. Texas joins the union. Mexico threatens war over the disputed Texas border. More than the Rio Grande Valley is at stake: expansionists dream of America reaching all the way to the Pacific Coast. Can a conflict with an already war-torn Mexico satisfy this lust for territory? When President James K. Polk sends troops the Texas border, the ensuing Mexican-American War becomes the heroic proving ground for future Civil War generals and presidents of the United States, Mexico and the Confederacy. But the glories of victory are tempered by the horrors of war as two very different cultures clash in an epic adventure of duty, patriotism and courage to the death.