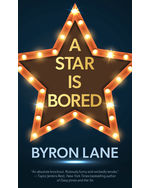 
A Star is Bored

Charlie Besson is tense and sweating as he prepares for a wild job interview with Kathi Kannon, star of stage and screen. She’s an actress in need of assistance, and he’s adrift and in need of a lifeline. Kathi is a bestselling author and award-winning movie star. She’s also known as Outrageous Hollywood royalty. Charlie gets the job, and his three-year odyssey is an initiation to that most sacred of Hollywood tribes: the personal assistant. But Kathi becomes much more than a boss, and as their friendship grows Charlie must make a choice. Will he always be on the sidelines of life, assisting the great forces that be, or can he step into his own life’s leading role? A hilariously heartfelt novel influenced in part by the author’s time assisting Carrie Fisher.

“This engrossing account . . . offers a combination of riveting personal stories and little-known history, and will draw in readers from the first page. A must-read.”