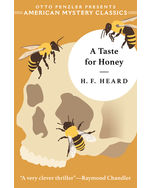 
A Taste for Honey

In a quiet village far from the noise of Victorian London, Sydney Silchester lives the life of a recluse. But when his honey supplier is found stung to death, the search for a new beekeeper takes him to the most interesting man in England — a man whose brilliant mind will lure Sydney into a life-threatening adventure. When Mycroft Holmes learns of the tragic death of the village’s other beekeeper, he senses the bloody hand of murder. But what villain would have the mad intelligence to train an army of killer bees? With Sydney at his side, Mycroft searches the village for a new kind of murderer: one who kills without motive.