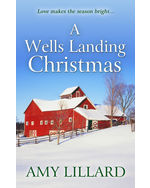 Ivy Weaver would give anything to be a part of Christmas in Wells Landing. But one reckless mistake made her an outsider, and it's all she can do now to tend to her ailing grandfather and make a living. She sure doesn't need Zeb Brenneman returning to help after he abandoned her for no reason. He's working hard to make amends, but Ivy isn't sure there's enough faith — or still-sparking love between them — to stir her forgiveness . . .

Zeb knows leaving Ivy was the biggest mistake he's ever made. Even though she won't hear him out, he's determined to prove he's become the trustworthy, steadfast man she truly deserves. But bright new chances and surprising revelations will give him and Ivy choices they never imagined. And finding their way back to each other will be the most challenging — and precious — Christmas gift of all . . .