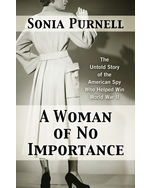 A Woman of No Importance: The Untold Story of the American Spy Who Helped Win World War II

In 1942, the Gestapo sent out an urgent transmission: “She is the most dangerous of all Allied spies. We must find and destroy her.” The target in their sights was Virginia Hall, a Baltimore socialite who talked her way into Special Operations Executive, the spy organization dubbed Winston Churchill’s “Ministry of Ungentlemanly Warfare.” She established vast spy networks throughout France and became the first Allied woman deployed behind enemy lines and — despite her prosthetic leg — helped to light the flame of the French Resistance, revolutionizing secret warfare as we know it.

Based on new and extensive research, Sonia Purnell has for the first time uncovered the full secret life of Virginia Hall — an astounding and inspiring story of heroism, spycraft, resistance, and personal triumph over shocking adversity. A Woman of No Importance is the breathtaking story of how one woman’s fierce persistence helped win the war.

“Purnell’s writing is as precise and engaging as her research, and this book restores overdue attention to one of the world’s great war heroes. It’s a joy to read, and it will swell readers’ hearts with pride.”

“A groundbreaking biography that reads like a spy thriller . . . a suspenseful, heartbreaking and ultimately triumphant tale of heroism and sacrifice.”

“Purnell vividly resurrects an underappreciated hero and delivers an enthralling story of wartime intrigue . . . fans of WWII history and women’s history will be riveted.”

“A remarkable chronicle . . . this lively examination . . . shows how, if Hall had been a man, dropping undercover in and out of occupied Vichy, Paris, and Lyon, setting up safe houses, and coordinating couriers for the Resistance, she would now be as famous as James Bond . . . Meticulous research results in a significant biography of a trailblazer who now has a CIA building named after her.”