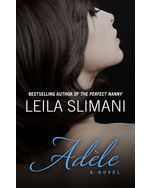 Adèle appears to have the perfect life: she is a successful journalist in Paris who lives in a beautiful apartment with her surgeon husband and their young son. But underneath the surface, she is bored — and consumed by an insatiable need for sex. Driven less by pleasure than compulsion, Adèle organizes her day around her extramarital affairs, arriving late to work and lying to her husband about where she’s been, until she becomes ensnared in a trap of her own making. Suspenseful, erotic, and electrically charged, Adèle is a captivating exploration of addiction, sexuality, and one woman’s quest to feel alive.