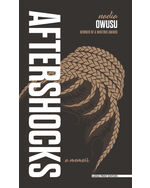 A deeply felt memoir from Nadia Owusu.
Young Nadia Owusu followed her father, a United Nations official, from Europe to Africa and back again. The instability wrought by Nadia’s nomadic childhood was deepened by family secrets and fractures. Her mother, who abandoned Nadia when she was two, would periodically reappear. Her father, a Ghanaian, died when she was thirteen. After his passing, Nadia’s stepmother weighed her down with a revelation that was either a bombshell secret or a lie. Aftershocks is the way Nadia hauled herself from the wreckage and came to understand that the only ground firm enough to count on is the one written into existence by her own hand.

“Deliciously detailed, sometimes gossipy, often moving, this in-depth examination of royal siblings is sure to be in demand.”

“Kudos to debut author Waxman for creating an endearing and realistic cast of main and supporting characters (including the children). Her narrative and dialog are drenched with spring showers of witty and irreverent humor, which provides much respite from the underlying grief theme.”