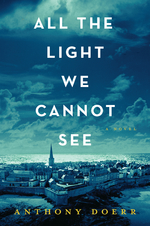 All The Light We Cannot See

A blind child‚ Marie-Laure lives with her father in Paris near the Museum of Natural History‚ where he works as the master of its thousands of locks. When the Nazis occupy Paris and father and daughter flee to the walled citadel of Saint-Malo. In a mining town in Germany‚ the orphan Werner grows up enchanted by a crude radio he’s found. His talent with these crucial instruments will eventually bring Werner to Saint-Malo‚ where their stories converge.

“A novel to live in, learn from, and feel bereft over when the last page is turned, Doerr’s magnificently drawn story seems at once spacious and tightly composed. . . . Doerr masterfully and knowledgeably recreates the deprived civilian conditions of war-torn France and the strictly controlled lives of the military occupiers.”

“If a book’s success can be measured by its ability to move readers and the number of memorable characters it has, Story Prize-winner Doerr’s novel triumphs on both counts. He convinces readers . . . that war despite its desperation, cruelty, and harrowing moral choices cannot negate the pleasures of the world.”

“This novel has the physical and emotional heft of a masterpiece . . . [All the Light We Cannot See] presents two characters so interesting and sympathetic that readers will keep turning the pages hoping for an impossibly happy ending . . . Highly recommended for fans of Michael Ondaatje’s The English Patient.”