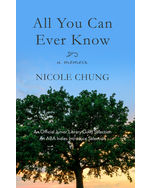 All You Can Ever Know: A Memoir

Nicole Chung was born severely premature, placed for adoption by her Korean parents, and raised by a white family in a sheltered Oregon town. From childhood, she heard the story of her adoption as a comforting myth. Nicole believed that her biological parents had made the ultimate sacrifice in the hope of giving her a better life, that forever feeling slightly out of place was her fate as a transracial adoptee. But as she grew up ― facing prejudice her adoptive family couldn’t see, finding her identity, becoming ever more curious about where she came from ― Nicole wondered if the story she’d been told was the whole truth.