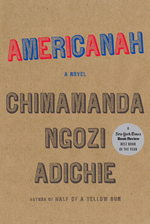 Ifemelu and Obinze are young and in love when they depart military-ruled Nigeria for the West. Beautiful, self-assured Ifemelu heads for America, where despite her academic success, she is forced to grapple with what it means to be black for the first time. Quiet, thoughtful Obinze had hoped to join her, but with post-9/11 America closed to him, he instead plunges into a dangerous, undocumented life in London. Fifteen years later, they reunite in a newly democratic Nigeria, and reignite their passion — for each other and for their homeland.

“AMERICANAH is a courageous, world-class novel about independence, integrity, community, and love and what it takes to become a full human being.”

“Witheringly trenchant and hugely empathetic . . . a novel that holds the discomfiting realities of our times fearlessly before us. . . . A steady-handed dissection of the universal human experience.”

“A cerebral and utterly transfixing epic. . . . AMERICANAH is superlative at making clear just how isolating it can be to live far away from home. . . . Unforgettable.”