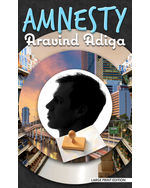 Danny — formerly Dhananjaya Rajaratnam — is an illegal immigrant in Sydney, Australia. Working as a cleaner, he’s been trying to create a new identity for himself. One morning, Danny learns a female client of his has been murdered. A jacket was left at the scene, which he believes belongs to another of his clients — a doctor with whom Danny knows the woman was having an affair. Suddenly Danny is confronted with a choice: Come forward with his knowledge about the crime and risk being deported? Or say nothing, and let justice go undone? Over the course of this day, he must wrestle with his conscience and decide if a person without rights still has responsibilities.

“Scrutinizes the human condition through a haves-vs.-have-not filter with sly wit and narrative ingenuity . . . Adiga's smart, funny, and timely tale with a crime spin of an undocumented immigrant will catalyze readers.”