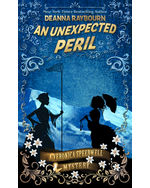 January 1889. As Veronica Speedwell assembles a memorial exhibition for a pioneering mountain climber, she discovers that the death was really murder. Veronica and her beau, Stoker, tell the patron, Princess Gisela of Alpenwald, of their findings. Gisela’s chancellor does not want to make waves — and then, the princess disappears. Having noted Veronica’s resemblance to the princess, the chancellor begs her to pose as Gisela for the sake of the peace treaty that brought the princess to England. She and Stoker must try to keep the treaty intact while navigating assassination attempts.