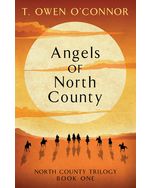 The Angels of North County is an adventure novel set in the late 1800s in the American West. The “Angels” are Civil War veterans exiled by the war to the horse country of North County. The Angels face off against a band of Native Americans led by a legendary warlord, the White Lion. The White Lion raids deep into the North County and his raid sets the Angels off on a journey of revenge that takes them down through the circles of the wasteland where they encounter the lustful, the greedy, the violent, the heretics, and other lost souls.