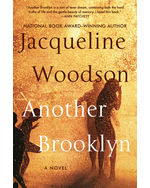 Running into a long-ago friend sets memory from the 1970s in motion for August, transporting her to a time and a place where friendship was everything — until it wasn’t. For August and her girls, sharing confidences as they ambled through neighborhood streets, Brooklyn was a place where they believed that they were beautiful, talented, brilliant — a part of a future that belonged to them.

But beneath the hopeful veneer, there was another Brooklyn, a dangerous place where grown men reached for innocent girls in dark hallways, where ghosts haunted the night, where mothers disappeared. A world where madness was just a sunset away and fathers found hope in religion.

“[Woodson] combines grit and beauty in a series of stunning vignettes, painting a vivid mural of what it was like to grow up African-American in Brooklyn during the 1970s . . . [she] draws on all the senses to trace the milestones in a woman’s life and how her early experiences shaped her identity.”

“The novel’s richness defies its slim page count. In her poet’s prose, Woodson not only shows us backward-glancing August attempting to stave off growing up and the pains that betray youth, she also wonders how we dream of a life parallel to the one we’re living.”

“With spare yet poetic writing, this long-awaited adult novel by National Book Award winner Woodson (Brown Girl Dreaming) is a series of vignettes narrated by August, shortly after her dad’s funeral and a chance encounter with an old friend.”

“A stunning achievement from one of the quietly great masters of our time.”