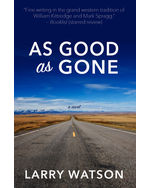 As Good As Gone

An Indie Next Pick
An Amazon Best Book

It’s 1963, and Calvin Sidey, one of the last of the old cowboys, has long ago left his family to live a life of self-reliance out on the prairie. Then his estranged son asks him to stay with his grandchildren for a week while he and his wife are away. But in the changing culture of the 1960s, Calvin isn’t just a relic — he’s a wild card.

“Watson’s achievement lies in the expertly woven details of a bygone era into contemporary society, while deftly portraying the tensions created when violence is used to solve modern conflicts. It is a rare work that so successfully explores the dichotomy of this divide with such emotional honesty, grace and tenderness. It is a pleasure to watch Watson further secure his place in American letters. For fans of Ivan Doig, Kent Haruf, Jim Harrison and Gran Torino.” — Bill's Bookshelf Selector, Bill Kelly

“Stunning . . . Watson is sure to win more praise for his powerful characterizations in the manner of Kent Haruf and Ivan Doig. Readers won’t get a novel any better than this.”