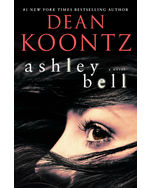 Bibi Blair is a fierce, funny, dauntless young woman — whose doctor says has one year to live. She replies, “We'll see.” Her sudden recovery astonishes medical science. An enigmatic woman convinces Bibi that she escaped death to save someone else. Someone named Ashley Bell. But save her from what? And who is Ashley Bell?

“[The] opening is gorgeous and crushing, and will shake awake anyone who thinks Koontz is just grinding out genre tomes. . . . It’s gripping stuff, but Koontz doesn’t stop there, adding a series of flashbacks regarding the alchemy of creativity and the fuel of trauma, and that’s before the Say what? twist that upends everything. . . . Fans will adore it. Koontz hits the canny nexus of horror, mystery, and fantasy here.”

“Koontz crafts a story shifting between reality and imagination, highlighted by distinct descriptions. . . . Bibi’s a believable protagonist surrounded by interesting bit players. . . . Koontz’s setting, with California coastal fog a metaphor for illness and for knowledge beyond understanding, makes real the often surrealistic narrative. . . . [Ashley Bell] cuts between the fantastical and the believable to dissect evil, explore the power of imagination, and probe the parameters of consciousness.”