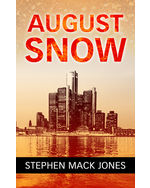 Half African-American and half Mexican, August Snow joined the Detroit police force and was drummed out by corruption. He won a $12 million settlement that left him low on friends. When business magnate Eleanore Paget asks August to investigate her private wealth management bank, he declines. Next day, she’s dead of an apparent suicide. August isn’t buying it.