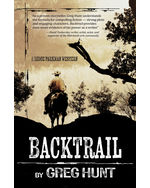 Ridge Parkman nearly dies on the western slopes of the Rockies after a bloody shootout with a fellow marshal gone rogue. While recuperating in a remote mining town, a kind, rough-edged woman convinces him that he’d make a fine husband, and that it’s time to give up his badge. Then he gets word Duff Joseph, a ruthless adversary from years past, has killed Ray Goode, a close friend and fellow marshal. Joseph and his band are headed into Wyoming territory to sell stolen guns to the hostile Indian tribes to the north, and there’s no one but Parkman anywhere close enough to try and stop him.