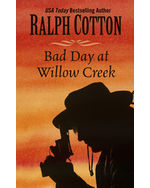 Considered the quickest gun alive‚ Fast Larry Shaw works as a hired killer until his wife is slain. Although he longs to be reunited with her‚ he won’t lie down for anyone. Then he slays one of the Katlin Gang‚ becoming a marked man. He plans to leave Willow Creek after helping Rita Vargas identify the man who fathered her unborn child. One candidate is the infamous William Bonney — or Billy the Kid — who now wants Shaw back in the saddle fighting beside him.