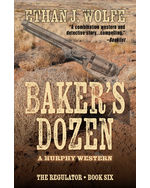 Living a quiet life of semiretirement with his wife, Kai, Murphy is called back into action by President Arthur to assist the New York City police with a serial killer on the loose. What baffles the police most is that the killer is using a .36 caliber cap-and-ball revolver with which to kill his victims, a weapon that has been obsolete since the end of the Civil War. His investigation reunites Murphy with his old friend Melvin Knoop, a Pinkerton agent who specializes in forensics.