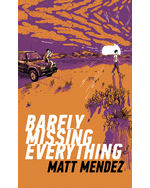 Juan has plans. He’s going to get out of El Paso on a basketball scholarship and make something of himself — or at least find something better than his mom Fabi’s cruddy apartment, her string of loser boyfriends, and a dead dad. His best friend JD has plans, too. He’s going to be a filmmaker one day. But there are some things you just can’t plan for . . . Like letters from a man named Mando on death row. Like finding out this man could be the father your mother said was dead. Soon Juan and JD are embarking on a Thelma and Louise-like road trip to visit Mando. Juan will finally meet his dad and JD has a perfect subject for his documentary. But, as we already know, there are some things you just can’t plan for.

“In this novel with a deep sense of place and realistic dialogue, characters who are vivid and fallible add deep psychological meaning to a heart-wrenching story. At once accessible and artful, this is an important book about Mexican teens holding onto hope and friendship in the midst of alcoholism, poverty, prejudice, and despair.”

“This searing portrait of two Mexican-American families conveys the experiences of a group that is underrepresented in YA fiction. Juan, a high school senior living in El Paso, knows that his only hope for a future is basketball . . . Mendez brings Juan and his world to life with vivid, honest characters and events that shine a light on what it can mean to be Mexican-American and poor in America.”

“Mendez minces no words as he presents issues that are all too real for many Latin American communities. . . . Mendez’s attention to raw detail in plot and diction is both painful and illuminating. With its shades of social justice, this will appeal to readers of Matt de la Peña and Jason Reynolds.”

“Mendez offers enticing glimpses of Mexican-American life, and he has an uncanny ability to capture the aimless bluster of young boys posturing at confidence, behaving rashly to mask feeling insecure . . . we can almost feel the existential claustrophobia of adolescence.”