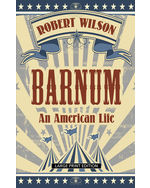 P. T. Barnum was the greatest showman the world has ever seen. Nearly 125 years after his death, the name P. T. Barnum still inspires wonder. Phineas Taylor Barnum repeatedly reinvented himself. He learned how to wow crowds and built a fortune that placed him among the first millionaires in the United States. He also suffered tragedy, bankruptcy, and fires that destroyed his life’s work, yet willed himself to rebuild and succeed again. Robert Wilson makes the case for P. T. Barnum’s place among the icons of American history, as a figure who represented a sense of optimism, industriousness, humor, and relentless energy.