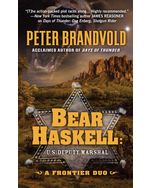 Bear Haskell, U.S. Deputy Marshal, rides for Chief Marshal Henry Dade out of Denver’s First District Court. The former Union war hero and Pinkerton agent is over six-and-a-half feet tall and broad as a barn door, and wears a necklace of bear claws taken from the grizzly that almost had him for supper. Bear holds a grudge and gives no quarter — to grizzly bears or men. In two rapid-fire westerns, Bear has the nasty assignment of going after the man or men who backshot an old lawman friend, and then hunts down a notorious, mysterious, and cruelly cunning killer known as “the Jackal.”