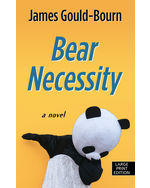 Danny’s life is falling apart: he’s been fired from his job, is behind on rent, and has become a single father to eleven-year-old Will — who hasn’t spoken since the death of his mother a year earlier. Danny needs money to appease his nasty landlord. After observing local street performers, Danny impulsively buys a panda costume to work as a dancing bear. While performing one day, Danny encounters his son in the park. Will opens up, speaking for the first time since his mother’s death. Danny is afraid of disclosing his true identity and losing Will’s trust. Meanwhile, Danny wonders if has can dance his way out of debt and avoid being beaten up before he has a chance.

“Promising, sweet . . . a feel-good story about coping with grief.”

“Refreshing . . . a well-written, speedy read that focuses on the love between a dad and his son and how it can lead to friendship.”